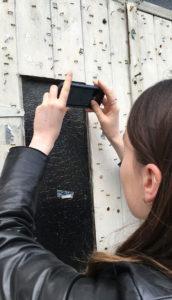 Originally from Galway on the west coast of Ireland, Holly moved over to the UK to study on the BA Jewellery course at Central Saint Martins. Upon graduating in 2017, she went on to show her work at exhibitions within the UK and in Europe.

Driven by an interest in process, Hollys’ work aims to blur the lines between fine and contemporary jewellery, offering a new take on everyday classics. The concept for her work is routed in the idea of framing moments of passivity that we bypass from A to B without acknowledging the fragile beauty of it.

Through disrupting forms found in traditional mens jewellery pieces, the jewellery, handcrafted in gold and freshwater pearls, playfully explores the flux between creation and destruction – drawing attention to the everyday by framing the unseen.